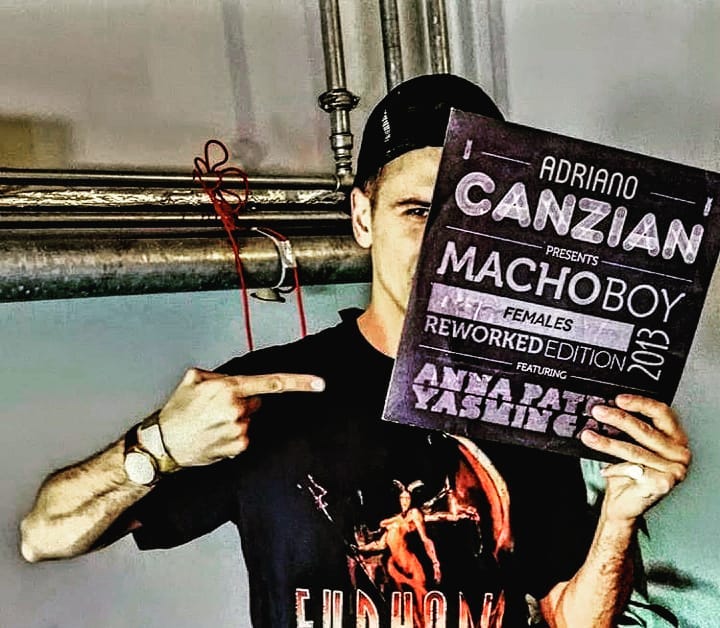 OUT 28 January 2013—->>> IN BOTH VINYL 12″ AND DIGITAL   Back to the future!!! With the crispy voices by Anna Patrini and Yasmin Gate, Adriano Canzian transforms the Macho Boy in pure acid techno 12” sensuality. Containing 4 tracks (BLACK, GOLD, RED and PURPLE reworks), “Macho Boy Females Reworked Edition 2013” deflowers 51beats – at its first vinyl printing – with the new and modern dancefloor killer, available in both DIGITAL and 12” VINYL (distributed by vinyllabor.com). Four reworks for a new chromatic scale representing the different tracks moods. BLACK, subterranean techno statement, it’s an acid dialogue between cheeky vocal and thumping compressed percussions. Pure sexual obsessions in minimal-key for GOLD, the second dancefloor killer track reworked by Canzian and Plasman, with 8bit sounds. That is perfect for dawning after parties. The RED rework holds the electro techno pushing by Cani Giganti and their analogue synthesizers. The Arabic music incursions are just to stop breathing for a while, and then it’s time for the prodigiously dance chase, again. It all ends with PURPLE, hypnotic minimal suspance with increasing vocal and breathtaking percussions. “De pequeña era viciada y de grande soy viciosa” says everything about this release. Oops!

ADRIANO CANZIAN studied sculpture and graphics, and then painting and contemporary art at Accademia delle Belle Arti in Rome, the city where he moved at 19. In 1995, he began exhibiting his work at various art galleries in Rome, London, Paris and New York. In the meantime, he moved to Paris in 2000 and started a parallel career as a music producer, working with the fashion world and experimental theatre. In 2003, he signed his first music contract with a German label, DJ Hell’s International DJ Gigolo Records, becoming the first and only Italian producer in Hell’s «factory». Released in August 2003, his first single Macho Boy became a fashion-world instant classic. The 12″ was included in many CD compilations related to the world of style (Givenchy, Versace, Colette Paris, Nag Nag Nag London, etc.) A few months later, with the release of his second 12″ My Boyfriend Is Very Sexy, all the international magazines proclaimed Canzian “inventor” of a new style,  Cyber-Porno-(Homo)-Electro. In May 2005 his debut album “Pornography” ….. FULL BIO here

Adriano Canzian is never exhausted, and 2013 will be the year of the “Macho Boy Females Reworked Edition 2013”, featuring Anna Patrini, Yasmin Gate, Plasman, and Cani Giganti, released in both DIGITAL and 12” (distributed by vinyllabor.com) by 51BEATS. FULL DISCOGRAPHY | BIO (IT)